“The project has reflected the environmental consideration and sustainable development with higher standards. Green areas within the project have been connected and linked to surrounding green areas. Water management has skillfully been designed. The important thing is the whole design of this work has represented the ability of Thai landscape architects who had admirably worked”

Mapletree Business City II, located in the western territory of Singapore Island designated to be an industrial zone with port and warehouses. Despite close proximity to Kent Ridge Park, the landscape design concept which draws inspiration from the adjacent nature reserve to create an ‘Urban Wilderness’ will not only provide an ideal comfortable environment for various co-working spaces and recreational facilities amidst tropical climate but also enhance the ecology at large. In an attempt to connect the ecological corridor from the nearby Kent Ridge Park Nature Reserves, a ‘Forest Ecosystem’ is created largely on top of car park podium acting as a welcoming space and a point of interchange between phase 1& 2 and on most of the sky roofs of the stacking tower with average soil depth at 1.8 meter to ensure forest future growth.

To manage a large surface of greenery, a series of mounds is created not only to deal with storm water management but also to craft the seemingly flat surface into a dynamic space to house various activities. The direction of the mounds also corresponds to the flow of the local wind direction and flow of people connecting between Phase 1 and Phase 2. On the space creation, the mounds are shaped to define the circulation and pocket spaces for activities. Both outdoor sitting spaces along the pathway or more secluded setting on top of the mound are created to promote interaction amongst not only each other, but also with nature as well.

Choice of planting material is the result from the exploration to identify species at the Kent Ridges Park to ensure their survival rate. Varying tree’s size from young sapling to grown up tree is randomly placed to form a true forest composition. On the under layer of the forest, a mix of local shrubs and dotted high shrubs is planted to give a sense of deep forest lushness. Variety of flowering and fruit bearing trees and shrubs species help enhance the created forest as habitat for butterflies, dragon flies, birds, and other wild animals to maintain biodiversity at large.

“FOREST ON THE ROOF”

We are in the time to seriously rethink how human settlements and everyday living affect the ecosystems at large. People spend majority of their day at work and often overlook the importance of the environment around them. At the Mapletree Business City II, we seek to define a new workplace typology that could embrace modern working lifestyle with the environmentally friendly urban space that also allows nature to thrive.

The main concept is to create ‘Forest Ecosystem’ on the roof of a car park podium at the heart of the development. Not only that it will provide ideal microclimate for outdoor space in the tropical weather condition, it also extends ecological corridor from nearby nature reserve. Efficient storm water management that could reduce flooding risk and nurture effective rainwater harvesting system is planned along with careful topographical design to ensure long term sustainability aspect of the project.

Mapletree Business City II is located in the western territory of Singapore Island once designated to be industrial estate zone with ports and warehouses. Despite close proximity to the Kent Ridge Park, a nature reserve, past developments in the area did not pay close attention to preserving the nature. With high level of urban density and competitions of establishments that multiply like concrete mushrooms, the question arise on where will the green areas be?

The site of 35,000 square meters in which this project stood on was once occupied with multi-storey warehouse covering the entire site with concrete surface. As the demand for office spaces in Singapore is on the rise, the warehouse is turned it into a modern workplace connecting to the existing phase 1 office tower in the front. As there is a prominent escalation of innovation companies and startups that see the importance of a balanced and healthy work environment, tech giant like Google who is one of Mapletree’s main tenant, are geared towards a property that value this ideology at its core. Considering the master plan as a whole, stepping tower of phase 2 is planned on the northern end of the site to allow large open space in the center of phase 1 and 2 to become a major green open space for outdoor activities shared by both phases, replacing previous hard surface with luscious greenery.

In an attempt to connect the ecological corridor from the nearby Kent Ridge Park Nature Reserve, a ‘Forest Ecosystem’ is created largely on top of the car park podium which acts as a welcoming green space and a point of interchange between phase 1& 2. In total, 70% of the site area is covered with vegetation.

Following topics are considered in order to achieve a sustainable forest on the roof.

Due to the limitation on ceiling height of the car park below, average soil depth initially achieved is only 800 mm. which is not sufficient to grow big trees. To deal with this, series of mounds is created throughout the roof. The highest point of each mound is set at 1 metre high, thus, 1.8 metre soil depth is achieved at the highest point. The mounds in natural form, varies in size, become 3 dimensional elements in the landscape shaping various spaces mimicking deep forest experience.

Network of pedestrian walkways in different width cuts through the mounds creating a natural movement of people wandering/commuting through the greenery. Some of the mound is integrated with private sitting area on the top of the mound surrounded with lush vegetation. The direction of the mounds also corresponds to the flow of the local wind direction and flow of people connecting between Phase 1 and Phase 2.

Moreover, the greenery around the building continues under the building footprint where they can be reached by 45 degrees of sunlight due to a 12-metre elevation of the building. Shade tolerant species typically found on forest ground are selected for this area to ensure a long-term growth of the forest. The connectivity allows a natural circulation flow into the building and to emphasize that human and nature can live as one.

Over a large expand of roof area, flat surface of greenery usually induces water clogging problems. Therefore, the mounds are not only designed to solve the soil depth issue, but they also utilized as main device to regulate the surface water run-off pattern efficiently.

Bio-swale is integrated at the foot of each mound to slow down the downpour and at the same time filtering dirt and toxin that come along with the rainwater through sandy layer. Unlike concrete gutter system, bio-swale retain some moisture in the ground after the rain making depend less on the irrigation watering.

Eventually, the pre-filtered rainwater is the collected at the lowest point and leads into the rainwater harvesting tank, treated and recycles for irrigation. The tank size is calculated to hold 7 days of irrigation water.

Incorporated with rain censor system, which will save irrigation water during rainy days, the amount of irrigation water saved in the tank will be sufficient for the relatively wet island of Singapore.

In order to create a forest habitat, over 65 indigenous species of trees, shrubs, ground cover, and water plants mostly found at nearby Nature Reserved were specified.

Another good property of the mound is that it provides greater surface to plant more trees and shrubs compared to flat ground of the same outline. Trees with different sizes from sapling of 0.5-1 metre high to young trees at 2-3 metres high to mature trees at 6-8 metres high are randomly placed to form a true forest composition. Feature trees of more than 8 metres high is only used at an area where instant shaded is needed.

Majority of the trees planted are the younger trees which have better growth rate compared to older ones. Average spacing of each tree is around 2-4 meters to achieve dense foliage which allow less sunlight to reach the ground.

Variety of evergreen, flowering and fruit baring trees, and shrubs species, including tropical forest trees, tropical forest shrubs, and water plants, as well as the ‘eco pond,’ help enhancing the forest as habitat for butterflies, dragon flies, bird, and other wild animal to maintain healthy biodiversity at large.

On spatial design, the design encourages office workers to step out and perform typical office activities in the natural surroundings, whether to have lunch, co-working, organize meetings or workshops to promote creativity and a healthy lifestyle. Both outdoor sitting spaces along the pathway or more secluded setting on top of the mounds are created to promote interaction amongst not only with each other, but also with nature as well. Green amphitheater is proposed at one corner to cater for large group gatherings during special events or performances and can also be treated as quiet sitting space during regular days. Recreational programs such as full functional sport facilities ranging from a futsal court, a basketball court, an outdoor fitness station and a jogging route, which connects out to the Kent Ridge Park and government’s project of Rail Corridor, allow a connectivity between private and public users to strengthen the urban up-flow. After sunset, landscape lighting illuminates the forest at night to cater for those who use recreation facility after hours.

The landscape design concept which draws inspiration from the adjacent nature reserve to create an ‘urban wildernesses not only enhance the ecosystem at large, but also provides an ideal comfortable public space to the city. 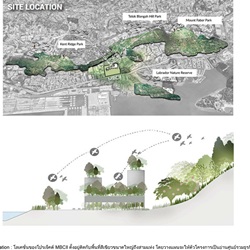 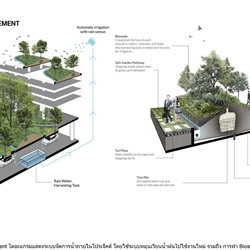 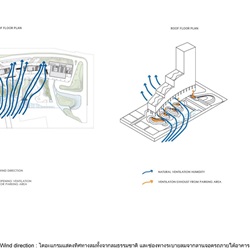 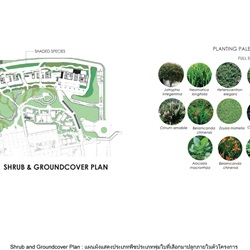 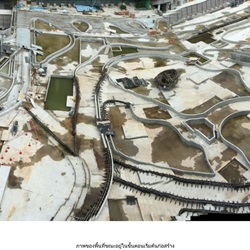 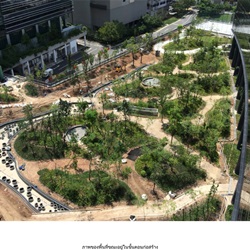 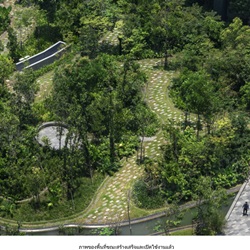 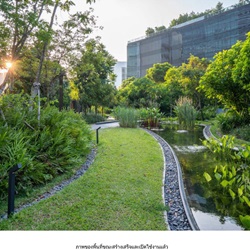 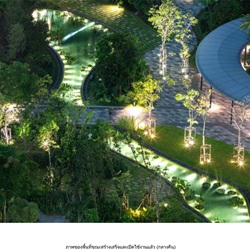 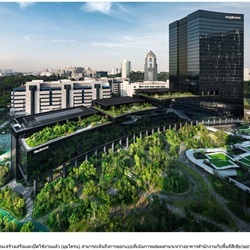 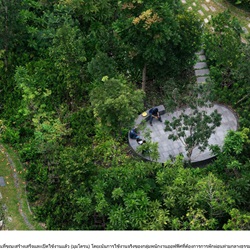 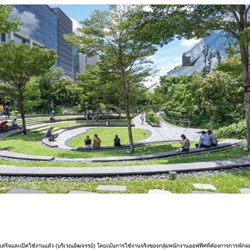 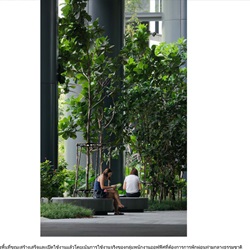 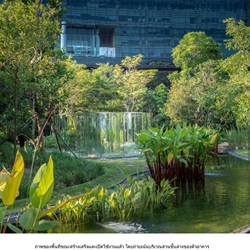 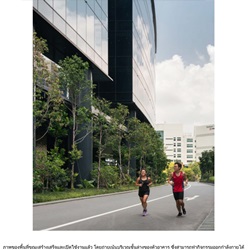 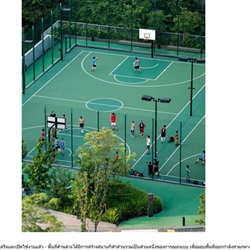 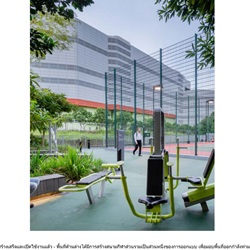 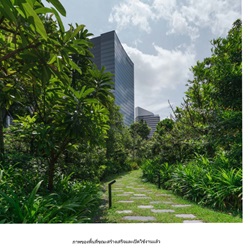 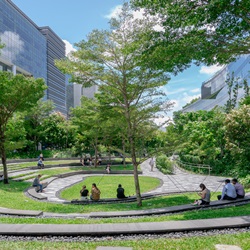 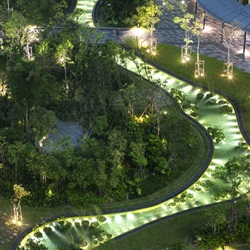 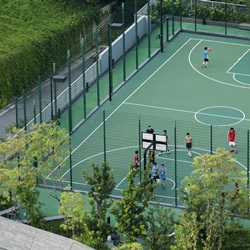 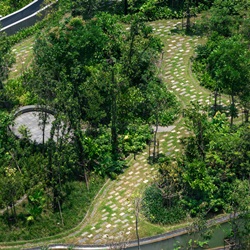 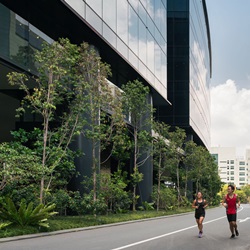 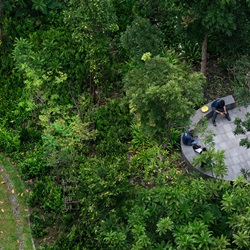 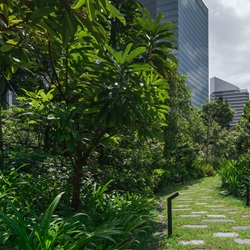 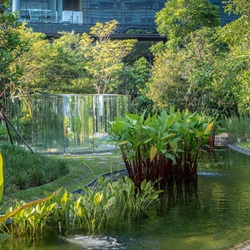 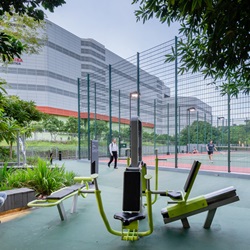 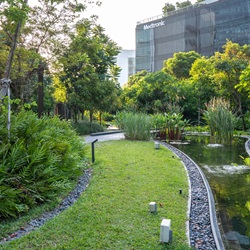